The term "generation gap" is most commonly associated with the 1960s and early 1970s, when the unusually large cohort of Americans born during the post-World War II baby boom reached adolescence and then adulthood. According to a widely-accepted perception, a society-wide gulf opened up during this period dividing the then-youthful baby boomers from their parents and grandparents over political issues such as civil rights, women’s rights, and the Vietnam War as well as cultural battles over music, art, fashion, sexual practices, and recreational drug use. A half-century later, the popular identification of "the sixties" with a burst of youth-led social change remains as familiar as ever in the collective American mind, even for the growing share of the national population born too late to have experienced the era themselves.

But a much bigger, though less well-promoted, generation gap is happening right now. The difference in political loyalties between younger and older Americans is both larger and more consistent today than it was during the golden age of boomer self-mythologization: 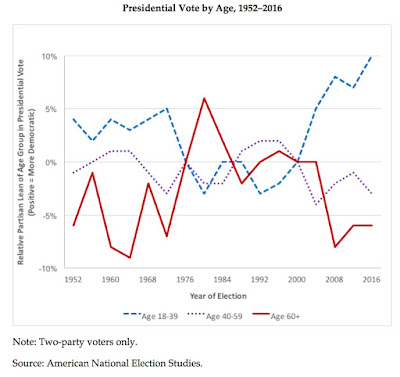 This growing gap in the partisan affections of the young and the old is caused by two parallel developments. One is that Americans under the age of 40, especially members of the "millennial generation" (born in 1982 and after), are distinctively more liberal and Democratic than their older counterparts. The other is that older generations have become more Republican-leaning over time—even the baby boomers who once symbolized sixties-style lefty politics: 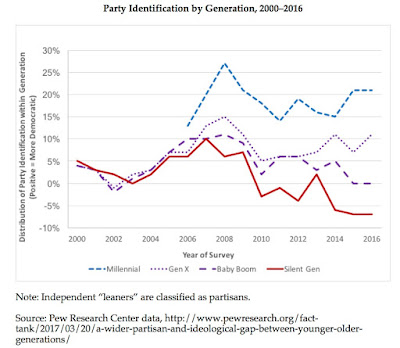 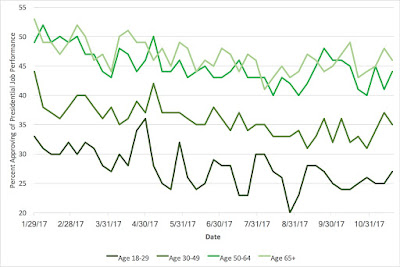 American politics today is shot through with intergenerational conflict, from cultural disagreements over transgender rights to economic proposals that raise tax rates on students while cutting them for wealthy investors and the estates of multimillionaires. If your Thanksgiving dinner table becomes the battleground for a political war between the generations this week, you will surely not be alone.
Posted by David A. Hopkins at 6:42 PM
Email ThisBlogThis!Share to TwitterShare to FacebookShare to Pinterest
Labels: Baby Boomers, Donald Trump, Generation Gap, Millennials, Parties, Political Generations

What Matters for Moore Is the View from Alabama, Not Washington

The accelerating litany of serious accusations against U.S. Senate candidate Roy Moore of Alabama has prompted incumbent Republican senators to denounce and distance themselves from their party's embattled nominee over the past few days. Reactions within the chamber that Moore seeks to join next month have been uniformly harsh, ranging from the withdrawal of previous endorsements to calls for Moore to be immediately expelled from the Senate if he were to win the December 12 election.

Reporters are busy this week chasing down reluctant Republicans in Capitol hallways to put them on record about the Moore situation, revealing what appears to be a rough consensus that (a) Moore should drop out of the race and (b) a more suitable Republican candidate should mount a write-in campaign regardless of whether he does drop out.

This is all perfectly newsworthy, but not likely to matter too much in terms of what happens from here. Moore has no particular reason to listen to what Washington Republicans say. If he thought that he couldn't win despite their opposition, he might consider withdrawing to avoid a humiliating defeat—but why would he think that? After all, Moore defeated the appointed incumbent, Luther Strange, by nine points in the Republican primary runoff even though Strange enjoyed the backing of virtually all of the party's national elected leadership.

Of course, the most powerful Republican in Washington has yet to weigh in; a presidential denouncement would be more damaging to Moore than criticisms from the likes of Jeff Flake and Susan Collins. Even so, Trump inserting himself into the race seems like a necessary but hardly sufficient prerequisite for a Moore withdrawal or successful end-around of the official Republican nominee via write-in balloting.

And the president seems unlikely to devote himself to pushing Moore out once he returns to the White House from his trip overseas. Trump felt burned by the primary, when he campaigned for Strange only to see Alabama Republicans choose Moore instead, and will not be enthusiastic about taking on the risk of exhibiting political weakness a second time in the same election.  Plus, the specific nature of the accusations against Moore makes the whole issue a treacherous one for Trump to raise given his own personal record. He's in a poor position to adopt the this-is-not-what-the-Republican-Party-stands-for argument that George H. W. Bush made when disavowing David Duke's 1990 campaign against Louisiana senator Bennett Johnston, the closest parallel to the current situation in modern Senate history.

It's only natural for a press corps based in Washington to adopt a Washington-centric view of the race. But Alabama residents are more likely to be influenced by other Alabama residents. If Moore drops out (an unlikely development), if a write-in campaign gains traction, or if a critical mass of Republican voters skips the election or defects to Democratic nominee Doug Jones, it will reflect the political environment in Alabama and the behavior of party leaders, elected officials, and media outlets at the state level. And so far, the Moore revelations have been met with much less shock and outrage in the places where this election will actually be decided than in the Potomac-adjacent environs where Republican federal officeholders preside with waning influence over the untidy affairs of their party.
Posted by David A. Hopkins at 11:50 AM
Email ThisBlogThis!Share to TwitterShare to FacebookShare to Pinterest
Labels: Alabama, Donald Trump, Republican Party, Roy Moore, Senate, Special Election

It's an unfortunate quirk of the American political calendar that Virginia is one of only five states that do not select their governor at the same time as either presidential or congressional midterm elections. Political junkies are especially starved for election news in odd-numbered years, raising the danger of over-interpreting the scattered results that do occur. And the fact that one of the two states happening to vote in 2017 is also home to most of the national political media guarantees that attention will disproportionately fall on Virginia, dependably exaggerating the importance of the outcome of its state-level elections. (It's hard to imagine, say, Missouri or Arizona receiving nearly this much notice if it were in the same position.)

The real importance of the Democratic victories in Virginia (and New Jersey, and in scattered locations elsewhere) is not that they tell us much that we don't already know. Instead, they are just a few more data points confirming one of the most dependable rules in American politics: the president's party predictably loses ground in down-ballot races, and the amount of ground lost is correlated with the president's unpopularity.

And Trump is quite unpopular. His job approval rating is the lowest of any president on record during his first year in office, and roughly half of the country not only disapproves but strongly disapproves of his performance. The unexpectedly high Democratic turnout in Virginia tonight suggests that Democratic voters are highly motivated to express their opposition to the president and the ruling GOP when given the opportunity—even in the absence of a personally charismatic Democratic candidate. This is hardly a surprise, but it still demonstrates that the laws of American politics have not been completely rewritten in the Trump era. There were many good reasons to believe that 2018 was shaping up to be a good Democratic year before tonight's results rolled in, and the outcomes in Virginia and elsewhere simply constitute one more good reason.

If there is any actual further importance to the outcome tonight, it comes from the effect that the election returns might have on the calculations of incumbent politicians and potential challengers. If a number of Republicans representing competitive districts begin to mull retirement in response to tomorrow morning's headlines, and if an array of talented Democratic candidates gain enough confidence from these results to throw their hats into the ring for Congress and other offices, than tonight's events will indeed exert an effect on what happens next year. But there is still a long way to go until November 2018, and the nation's political climate cannot be foreseen with precision a full year ahead of time on the basis of a few state and local elections tonight.
Posted by David A. Hopkins at 10:33 PM
Email ThisBlogThis!Share to TwitterShare to FacebookShare to Pinterest
Labels: Donald Trump, Election 2017, Election 2018, Virginia
Newer Posts Older Posts Home
Subscribe to: Posts (Atom)