On Thursday, the Census Bureau released the 2020 census data for cities, counties, and other geographic subdivisions. Just as with the state-level numbers announced in April, there were some surprises. Many large metropolitan areas grew faster over the past decade than the Bureau had previously projected, with eight of the nation's ten largest cities showing an increased growth rate compared to the 2000 to 2010 period. At the same time, most of rural America shrank in absolute as well as relative terms. A majority—52 percent—of the nation's counties actually reported a smaller raw population in 2020 than they had in 2010: 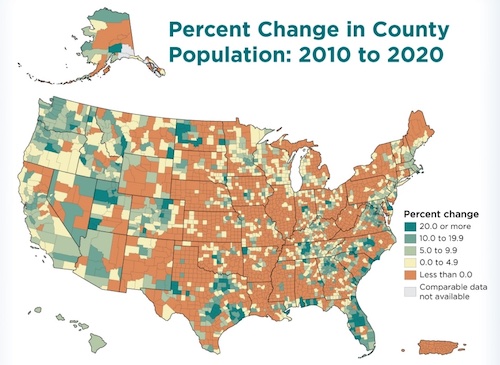 Many rural areas have been stagnant and struggling for a long time, but the distinct trajectories of big-city and small-town life have seldom been as divergent—and as connected to partisan politics—as they became over the past decade. Kathy Cramer's fieldwork in Wisconsin during the late 2000s and early 2010s found a prevailing sentiment of political alienation among rural voters, who perceived their communities as suffering a steady economic and cultural decline for which they often blamed greedy and decadent urbanites. An existing collective preference for the Republican Party among this heavily white, socially traditionalist population was soon super-charged by Donald Trump's brand of nostalgic populist nationalism, producing record Republican electoral margins in rural precincts from coast to coast in 2016.

But Trump's policies as president did not solve the long-term problems facing rural residents, or reduce the financial and cultural opportunities that migration to larger population centers can offer their children and grandchildren. The invocations of a nation fallen from past glories that resonated so strongly in small-town America inspired less enthusiasm among the residents of racially diverse, increasingly well-educated metropolitan municipalities, where even the challenges of daily life—high costs of living, insufficient housing supply, traffic congestion—often reflect the byproducts of growth and success rather than decline and decay. Prosperous suburban enclaves that once served as reliable sources of support for the mass Republican Party (such as Orange County, California; Loudoun County, Virginia; and Cobb County, Georgia) continued to shift steadily toward the blue end of the partisan spectrum in response to Trump's rise.

The fundamental geographic division in American politics has traditionally been a sectional conflict setting the North against the South. The idioms of "red states" and "blue states" caught on widely after the 2000 presidential election because they could be applied to a regional divide—blue North, red South—that was already presumed to reflect the main axis of political debate and competition. But the partisan difference between large-metro and rural residents has now become much larger than the gap between northerners and southerners. 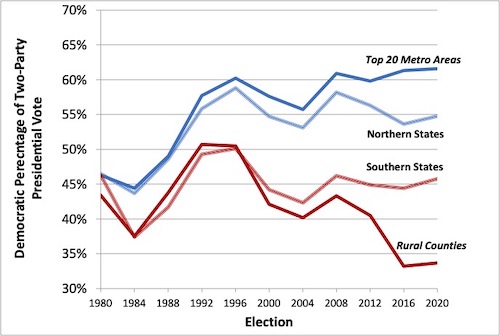 Until 1996, the difference in presidential voting between residents of the nation's largest 20 metropolitan areas and inhabitants of rural (non-metropolitan) counties resembled the difference between the South (defined here as the eleven states of the former Confederacy plus West Virginia, Kentucky, and Oklahoma) and the North (defined as all other states from the Atlantic coast west to Minnesota, Iowa, and Missouri). Between 2000 and 2008, the urbanism gap was somewhat, though not dramatically, larger than the regional gap. By 2016 and 2020, however, the partisan difference between large metros and rural areas had become fully three times as large as the North-South difference, which had visibly narrowed (from 12 to 9 percentage points) from its 2008 peak.

Look inside practically any state in the country and you'll find blue dots corresponding to its densent and most populous urban centers, each surrounded by a sea of red rural hinterlands. The regional divide has declined since 2008 because the urban precincts of the South have grown bluer over time while the rural territories of the North have gotten redder, both shedding some of their sectional distinctiveness in the face of a consistent nationwide trend. This gave Donald Trump the ability to flip a few northern states with significant rural populations from blue to red in 2016 (such as Iowa and Wisconsin), while Joe Biden likewise outperformed previous Democratic nominees in Georgia and Texas in 2020 by winning the large metro areas of greater Atlanta, Dallas, and Houston—none of which had been carried by Barack Obama in his 2012 victory.

In a widening electoral conflict between urban and rural America, one might think that it would be clear which side holds the strategic advantage. More than twice as many voters live in one of the top 20 metro areas as reside in all rural counties combined, and the results of the new 2020 census reveal that the American population is becoming more collectively metropolitan at an accelerating rate. Even in states where they control the post-census redistricting process, Republicans will face the challenge of needing to accommodate the declining numbers of their loyal rural constituency.

But as the figure above reveals, Republicans' plight as the rural party of a increasingly non-rural nation has so far been balanced out by the fact that rural America has moved toward the GOP at a faster pace since the 1990s than urban America has shifted away. When combined with the structural biases of the electoral college and Senate in favor of rural voters, the current Republican popular coalition can easily remain fully competitive in national elections. The intensifying conflict between city and country has had a number of important consequences for how each party operates, which voters it attracts, and which states and districts it is likely to win, but it does not show any signs of ending the perennially close competition for control of the federal government that has become a distinctive characteristic of our current age.