Biden at 100 Days: An Interview with The Signal

Graham Vyse of the new online publication The Signal called me yesterday and we chatted about the record of the Biden presidency at the 100-day mark. Normally, my interviews with reporters yield a quotation of a sentence or two in a larger news story, but this time our discussion was turned into a more in-depth Q&A covering many different aspects of the current political moment. You can read an edited transcript of the interview here; the site requires an email address to sign up but access to the piece is free.

2020 Was as Geographically Polarized as 2016, But Biden Did Just a Little Better in the Right Places

The idea of Joe Biden as a depolarizing figure, someone who aimed to transcend rather than exacerbate the nation's political divisions, was both a dominant rhetorical theme of his campaign and a major strategic premise behind his nomination. In particular, Biden was supposed to be uniquely appealing to the type of white, older, modestly-educated, socially traditionalist voter who had wandered away from the Democratic Party sometime between Barack Obama's first victory and Hillary Clinton's last defeat. A candidate who won back a significant share of this electoral bloc while receiving the energized support of the groups alienated by Trumpism—cultural liberals, metropolitan professionals, young people—would be in excellent position to gain the kind of decisive national victory that many polls suggested Biden would achieve.

In the end, that didn't happen. Whatever demographic and stylistic differences distinguished Biden from Clinton or Obama failed to change enough votes to reorder the fundamental electoral constituencies of both major parties. The geographic polarization that has defined 21st century American politics remains fully intact—but a few incremental improvements in Democratic performance turned out to be just strong enough, and well-located enough, to eke out an electoral college majority.

Most states continue to be faithfully Democratic or Republican in presidential elections. By 2016, statewide popular margins had grown to differ with the national popular vote by an average of 20 percentage points, meaning that an election in which the candidates split the national vote 50-50 would produce a typical state margin that was a 60-40 landslide for one side or the other. Biden didn't succeed in healing this particular national divide, as the average state margin remained at 20 percent in 2020: 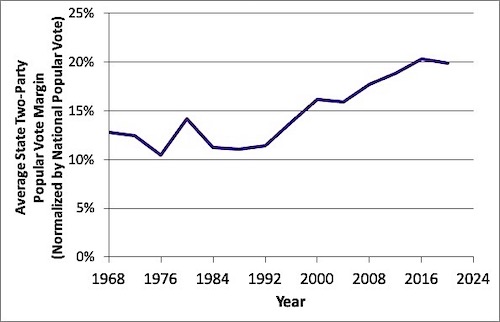 Below the state level, geographic polarization has been primarily fueled by a widening partisan gap between large metropolitan areas turning deeper blue and rural counties turning brighter red. This divide also remained virtually unchanged between 2016 and 2020. Biden very slightly outperformed Hillary Clinton in the nation's 20 largest metro areas, winning 62 percent of the two-party vote there—the best performance since Lyndon Johnson in 1964. But he only improved on her 2016 showing in non-metropolitan counties by half a percentage point—33.7% to 33.2%—despite expectations that he would prove to be a much more appealing candidate among the whites without college degrees who dominate most rural electorates. Trump nearly matched his own record rural performance of four years before, winning a greater share of the non-metro vote than even Ronald Reagan had received in his 49-state landslide of 1984: 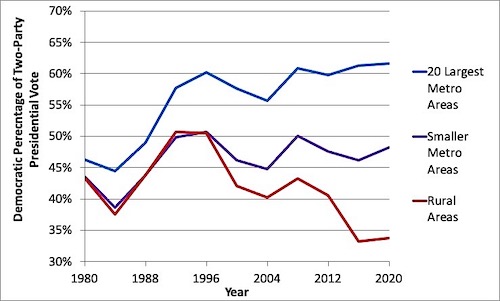 The main reason why Biden didn't do even better than he did within Top 20 metros was a pro-Trump national shift among non-white voters, especially Hispanics. His biggest single underperformance compared to Clinton in 2016 occurred in metro Miami, but he also lost ground in greater Los Angeles, San Jose/San Francisco, Chicago, New York, Cleveland, and Orlando. This trend helped to put Florida and Ohio out of reach for the Democratic ticket, but it was otherwise concentrated in non-competitive states where the party could well afford to lose votes.
In fact, a countervailing rise in Democratic support in 2020 among the voters of metro Atlanta, Phoenix, Philadelphia, and Detroit helped Biden narrowly carry four pivotal states that Clinton had lost, while improved Democratic performance in metro Washington, Denver, Minneapolis/St. Paul, and Boston gave Biden more electoral breathing room than Clinton had had in Virginia, Colorado, Minnesota, and New Hampshire—all virtually must-wins for a Democratic presidential nominee. So while the overall Democratic vote share in top 20 metro areas only increased very slightly between 2016 and 2020, it was more fortuitously distributed from the perspective of electoral college strategy.
As the second figure above reveals, the biggest aggregate movement toward the Democrats in 2020 occurred within metro areas outside the Top 20. These other 251 metro areas cast somewhat fewer collective votes (41% of the total two-party vote in 2020, compared to 45% for the Top 20 metros). But their lower levels of racial diversity meant that the ongoing pro-Democratic trend among college-educated whites was less likely to be numerically counteracted by racial minorities' movement towards Trump.
Biden rarely exceeded Clinton's vote share by a dramatic amount in the smaller metros, but he consistently outperformed her by 1–3 percent across the nation (except for a few heavily Hispanic areas in Texas and California). His modest improvement in places like metro Pittsburgh and Harrisburg (Pennsylvania), Grand Rapids and Lansing (Michigan), and Milwaukee and Madison (Wisconsin) turned out to be critical elements of his precarious electoral college majority, and he was also able to carry the single Nebraska electoral vote from the metro Omaha-based 2nd congressional district that, under a plausible alternate scenario, might have given him exactly the number of electors needed to win the presidency.
It's possible that Trump had a unique appeal to certain small-town voters who might be more open to voting Democratic in future elections when he isn't on the ballot. But Democrats' retrospective interpretations of 2020 are more likely to focus on the apparent patterns of defection among urban minorities than the attrition of rural whites, which is a longer-term trend with fewer obvious implementable solutions. The continued decay among less-educated white citizens presents Democratic leaders with serious challenges in building a sustainable national electoral advantage, given this constituency's especially important geographic distribution. But if the culture wars have so alienated these voters that even Scranton Joe can't win them back, Democrats may conclude that, win or lose, the party's future inevitably lies in another direction.
Posted by David A. Hopkins at 4:55 PM
Email ThisBlogThis!Share to TwitterShare to FacebookShare to Pinterest
Labels: Democratic Party, Donald Trump, Election 2020, Geographic Polarization, Joe Biden, Political Geography, Republican Party
Newer Posts Older Posts Home
Subscribe to: Posts (Atom)