In Both Parties, Primary Voters Have Trump On Their Minds

Last Tuesday, Alabama congresswoman Martha Roby was held to 39 percent of the vote in the Republican primary in apparent punishment for her long-ago disavowal of Donald Trump after the Access Hollywood tape surfaced in October 2016. Roby faces a tough July 17 runoff election, where she will need to win an outright majority of votes in order to salvage her congressional career. This Tuesday, fellow House member and ex-governor Mark Sanford of South Carolina lost his own race for renomination to another Republican challenger whose main line of attack against Sanford cited his penchant for criticizing Trump.

Scattered election results don't always add up to a pattern—Sanford, in particular, carries his own personal baggage that long predates Trump's ascendance—but Tuesday brought another revealing set of outcomes in Virginia. Two-term Republican congresswoman Barbara Comstock represents a district that Hillary Clinton carried over Trump in 2016, yet her own party's voters do not appear to have much patience for her attempts to maintain an independent political persona in order to preserve her general-election viability. Without much advance warning, a relative unknown challenger from the right held Comstock to just 61 percent of the vote in the Virginia Republican primary. At the same time, Republican primary voters in northern Virginia provided Corey Stewart, an outspoken defender of the state's Confederate heritage, with the margin he needed to capture the party's U.S. Senate nomination.

One might expect that the population of wealthy, well-educated, professional, politically-connected Republicans who reside within the Washington suburbs would render northern Virginia about as promising a place as anywhere in the country to find a GOP electorate that was relatively skeptical of Trump and Trumpism. But there's little trace of such sentiments within the latest primary returns, in Virginia or elsewhere. In fact, it's hard to identify a single consistuency nationwide where Republicans are sufficiently numerous to realistically compete in general elections but where separation from Trump, even in muted form, is devoid of serious political risk for party candidates.

Open criticism of the current president from within the ranks of Republican officials is thus likely to be restricted to the handful of retiring incumbents—Jeff Flake, John McCain, Bob Corker, John Kasich—who no longer fear retribution from their own party's voters. Other Republicans may grumble on background to reporters about the current administration, but the message they hear from their voters these days is, at least in their perception, a demand for unconditional public loyalty. This state of affairs is only likely to change if the conservative media, now acting as the most powerful source of opinion leadership within the Republican Party, sours on Trump—which hardly seems possible in the immediate future.

It's not just Republican voters who are preoccupied with Trump these days. The abrupt surge in the share of women nominated for Congress by Democratic primary electorates that I discussed last month has remained intact through the recent round of primaries, representing an unmistakable response to Trump's election.

As of this week, a majority of states have now held primary elections for the 2018 midterms, and it is safe to say that the number of female House nominees on the Democratic side will set a historical record by a wide margin. In fact, Democrats have nominated 74 non-incumbent women for the House so far, which already exceeds the all-time high number (73) reached by the party in the 2012 election—with 24 states yet to hold primaries this year and several others with unresolved runoffs. Currently, 41 percent of Democratic House nominees are women, including 48 percent of non-incumbent nominees (see below). More than a year into his presidency, the shadow cast by Trump over both sides of American politics seems only to be growing in size. 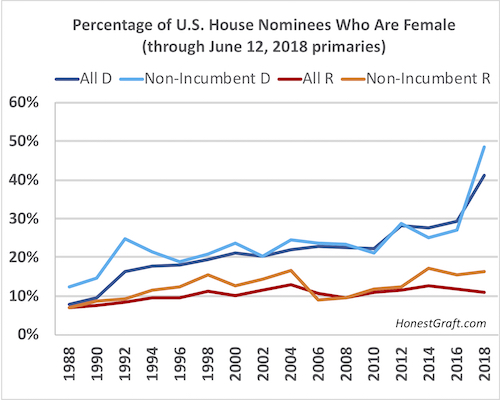 What the Governor of Massachusetts Tells Us About American Voters

A new WBUR poll of Massachusetts residents confirms that the incumbent governor, Charlie Baker, is overwhelmingly popular and in excellent position to win a second term by a landslide. Baker is viewed favorably by 67 percent of poll respondents (compared to just 9 percent with unfavorable views) and leads each of his two potential general-election opponents by an identical 40-point margin. The 2018 election will feature pivotal and highly competitive governors' races in a number of states from Maine to Nevada, but we Bay Staters appear likely to be deprived of such excitement this fall.

Baker is a Republican running in a normally Democratic state and a pro-Democratic national electoral environment, yet he is not merely favored to win but heavily so. In an era in which it is fashionable to characterize Americans as hopelessly "tribal" in their partisan loyalties, he has managed to become broadly well-liked across party lines (in fact, according to the WBUR data, Baker is slightly more popular with Massachusetts Democrats than among his fellow Republicans). Baker's success thus represents a rare outlying case that allows us to better understand the foundations of contemporary political conflict in the United States. What has allowed him to escape the partisan wars that have scarred so many other politicians?

Part of the answer is Baker's own public persona. He has made efforts to define himself as an ideological moderate by breaking with conservative doctrine on social issues like abortion, same-sex marriage, transgender rights, and gun control, and he has not proposed deep budget cuts in education or other popular public programs. Baker has also distanced himself from his party's national leadership, refusing to endorse Donald Trump (whose favorability rating in Massachusetts is just 29 percent, according to the WBUR poll) in 2016 and publicly criticizing the president's actions and words on several occasions.

But the behavior of the Democratic opposition is also important. By and large, Democratic leaders in the state legislature and state constitutional offices have taken a cooperative approach to the Baker administration rather than attempting to exacerbate partisan rancor at every turn. Democratic voters who are liable to take cues from their own party officials when forming opinions on political matters thus have little reason to form a critical view of Baker's governorship. Because both of the possible Democratic nominees for governor are relative unknowns with limited fundraising capacity, the 2018 campaign is unlikely to change enough Democrats' minds about the incumbent's job performance to plunge him into electoral danger.

For all the evidence that Democratic and Republican citizens increasingly disagree over policy issues and view each other in negative personal terms, it's still important to acknowledge the role of messages from elites—politicians, interest group leaders, media figures—in regulating the climate of partisan conflict. The mass public is often portrayed as fatally inattentive to political nuance, but it does seem to notice when party leaders prize collaboration over confrontation (and vice versa). At the national level, however, it has become rare for both sides to view mutual cooperation as serving their interests at the same time—and even if party leaders themselves wish to turn down the partisan temperature, they face increasing pressure to remain maximally combative from ideological media outlets and other powerful actors, especially on the Republican side.

One of the common themes of this blog is that politics is inevitably full of tradeoffs. For Charlie Baker, a moderate and mild-mannered governing style may well guarantee him a second term in office but will almost certainly prevent him from rising in the national Republican Party. For Donald Trump, slash-and-burn politics has succeeded in satisfying conservative activists and media authorities, but at the cost of legislative productivity and an unusually energized Democratic opposition. Yes, Americans are collectively divided these days—but it's important to note that such developments don't happen on their own. Inevitably, there are political leaders, whether in or out of office, who are doing the dividing.
Posted by David A. Hopkins at 11:59 PM
Email ThisBlogThis!Share to TwitterShare to FacebookShare to Pinterest
Labels: Charlie Baker, Donald Trump, Massachusetts, Polarization, Republican Party
Newer Posts Older Posts Home
Subscribe to: Posts (Atom)