Opinion polls confirm that Democratic voters don't like Donald Trump any more than Republicans liked his predecessor Barack Obama, but anti-Trump popular activism ("the Resistance") has received a small fraction of the press coverage that the Tea Party movement attracted in 2009 and 2010. There are several reasons for this imbalance: the absence of a liberal counterpart to the powerful conservative media universe; the relative lack of bitter internal conflict within the Democratic Party as compared to the Republicans' persistent battles over ideological purity during the Obama years; and a Trump presidency that has itself produced an overwhelming barrage of daily headlines, making it difficult for any other story to gain sustained notice.

During the rare breaks in the Trump-generated action, media attention has occasionally focused on what has appeared to be a surge in political participation by women, from the well-attended Women's March of January 2017 to reports of an increase in female campaign donors to studies indicating a rise in women-led political organizing efforts. With Tuesday's primaries in Arkansas, Georgia, and Kentucky (plus a primary runoff in Texas) bringing the number of states that have already selected 2018 party nominees to 13, collectively holding 34 percent of the total number of House seats nationwide, it's a good time to examine whether the number of female congressional candidates is in fact historically exceptional, and whether—as one recent story suggested—such a trend is apparent in both parties, not just among the Trump-allergic Democrats.

Calculating the share of women among House nominees, and non-incumbent nominees, within each party in the states that have held primaries so far, and comparing these figures to previous years, yields the chart below. As Susan B. Anthony might say, wowee zowee: 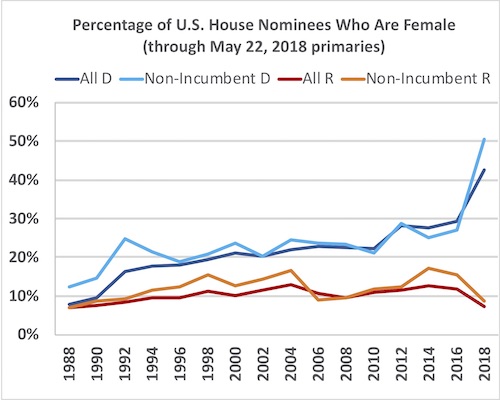 So far in 2018, 43 percent of the Democratic nominees for the U.S. House are women, producing what would be the highest share of female congressional nominees in history for a major party by far if sustained through the remaining two-thirds of the primary calendar (the current record is 29 percent, set by the Democrats in 2016). In the districts with no Democratic incumbent seeking re-election, women actually outnumber men at this point in the nomination season by a margin of 51 seats to 50.

These numbers will shift somewhat in one direction or the other as more states hold their primaries. But it's apparent enough by now that we are witnessing a dramatic and historic change in the gender distribution among Democratic congressional nominees, caused by a rise in the supply of, and demand for, female candidates within the party in the wake of Trump's election (and Hillary Clinton's defeat). It's equally clear that this development is not occurring in parallel on the Republican side. In fact, the GOP is drifting the other way—so far, only 7 percent of the party's House nominees this year are women (compared to 12 percent in 2016), the lowest share for the party since the election of 1988. The proportion of female Republican nominees isn't much bigger when incumbents are excluded (9 percent).

From time to time, I'm asked whom I think the Democrats will nominate for president in 2020. With no obvious heir apparent in the party and a large field of probable candidates, I find it impossible to guess which individual contender is most likely to emerge from the nomination process two years from now. Moreover, the surprises of 2016 have left some of us supposed political experts with an enduring dose of humility that leads us to be wary of forecasting electoral outcomes.

But there is one prediction that I have been making with a great deal of confidence: I think there will be very strong sentiments among many Democratic activists and primary voters to nominate another woman for president in 2020. This doesn't mean a woman will win for sure; the nomination system is complex and multifaceted, and multiple female candidates could easily split popular support among themselves in the pivotal early states to the strategic benefit of a male opponent. But it seems certain that Trump's ascendance will cause gender to be even more salient among active Democrats next time than it was in 2008 and 2016, when the first viable potential female nominee sought the presidency. The primary results of 2018 thus represent both a critical contemporary development and a likely foreshadowing of our political future.
Posted by David A. Hopkins at 11:42 PM
Email ThisBlogThis!Share to TwitterShare to FacebookShare to Pinterest
Labels: Congressional Elections, Democratic Party, Donald Trump, Election 2018, Gender, Presidential Nomination Process, Primary Elections, Resistance, Women in Politics
Newer Post Older Post Home