Because most New Hampshirites watch Boston-based television, those of us on the other side of the Massachusetts state line receive all of the TV advertising associated with the New Hampshire primary but none of the first-in-the-nation voting power. For most of my fellow Bay State residents, this is undoubtedly a lose-lose proposition. But as a political scientist who's interested in the campaign strategy that political communications reveal, I enjoy seeing the ads—at least for the first few repetitions.

This is a purely anecdotal observation, but other than a scattering of pro-Hillary Clinton spots, an occasional Lindsey Graham promotion, and a fairly heavy recent barrage on behalf of John Kasich that now seems to have died out, my impression is that the paid airwaves in New England have been dominated for months by Right to Rise, the super PAC working to elect Jeb Bush. But you’d barely know the candidate’s full name just from the ads themselves, which nearly always refer to their subject simply as “Jeb”: 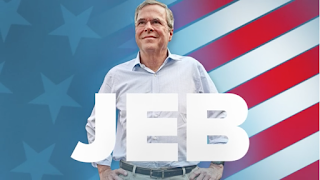 As Jeb Bush is neither a female pop star nor a Brazilian soccer legend, the omission of his surname is unusual—and hard not to notice, especially on repeated viewings. It is clear that the super PAC's ad-makers, probably following the lead of opinion surveys and focus group participants, have acted to minimize the explicit priming of Bush family ties when courting Republican primary voters. But this ostensibly clever tactic openly telegraphs a palpable defensiveness. The attempt by media consultants to create a “Just Jeb” persona merely reinforces Jeb Bush's obvious discomfort with discussing the George W. Bush presidency in public appearances and interviews. Since few things provoke journalists to push harder more than a politician's visible expression of unease, this pattern has merely egged on the news media.

When he entered the 2016 presidential race, Jeb Bush gambled that he could mount a formidable campaign by running on his record as governor of Florida—a tenure in office that ended nearly nine years ago—while simultaneously avoiding or finessing the question of whether his candidacy represented a potential third term for his brother's policies (and if not, why not). There was an understandable political logic at work: a faction of conservative politicians and activists had come to express dissatisfaction with his brother's record of expanding government services and spending, while a majority of the broader electorate disapproved of the nation's economic and military performance under George W. Bush's leadership. But the price of this approach has been an enduring cloud of perceptible awkwardness that threatens to envelop Jeb unless and until he wins the presidency on his own.

The media's awareness of this conundrum—and hair-trigger sensitivity to the day-to-day musings of one Donald J. Trump—has led to substantial coverage over the past week of Trump's attacks on George W. Bush's national security record and Jeb's aggressive defense. Fortunately for Jeb, this is relatively safe political turf to fight on (and his campaign's decision to release a video and mount a fundraising appeal responding to Trump seemingly confirms that he doesn't see a political danger in keeping the story alive). It's hard to imagine Trump's complaints about the failure to prevent 9/11, which sound a lot like arguments made by liberals, resonating strongly with Republican voters. While Jeb might prefer to avoid mentioning his brother at all for the next thirteen months or so, he'd surely rather defend the war on terror in a Republican nomination fight than, say, No Child Left Behind. Other analysts have credited Trump with exhibiting impressive political acumen here, but it's more likely that he's chosen the wrong issue with which to exploit Jeb's very real fraternal vulnerability.
Posted by David A. Hopkins at 11:51 AM
Email ThisBlogThis!Share to TwitterShare to FacebookShare to Pinterest
Labels: Donald Trump, Election 2016, George W. Bush, Jeb Bush
Newer Post Older Post Home