Are We Really Looking at the "End of a Republican Party"?

A new analysis by Clare Malone of FiveThirtyEight.com titled "The End of a Republican Party" takes a thoughtful, in-depth approach to addressing what is clearly the most important political question of the year: what does the rise of Donald Trump tell us about the state of American politics in general and the Republican Party in particular? It's well worth the read and contains some particularly informative reporting from within the world of the House Freedom Caucus, a group that played a key role in forcing the exit of John Boehner from the speakership last fall.

At the same time, the piece in its totality leaves me with the impression that the case for Trump as either an instigator or a product of transformational change in the Republican Party rests more on human perception than systematic data. It sure feels to many of us as if we're in the midst of a tectonic shift in our politics—and a celebrity neophyte's unexpected march to the presidential nomination of a major party, defeating a number of talented veteran politicians along the way, is just the kind of shocking development that causes observers to declare that the world has permanently changed and the old rules no longer apply. Nebraska senator Ben Sasse is even quoted as predicting the imminent end of the two-party system, expressing the view that Trump is just the leading indicator of bigger change to come.

But when I think about the evidence backing up these very strongly-felt sentiments, I keep coming up against plenty of signs that things aren't changing as fast as they seem. Here are a few specific examples:

1. Party coalitions and geography. One of the main pillars of the Malone argument, which has been echoed by many other commentators, is that Trump's rise cements a reordering of the two parties' electoral coalitions: the Republicans are now the party of the white working class, while the Democrats now represent an alliance between racial minorities and college-educated whites. To the extent that these characterizations are true, however, they are the consequences of long-term historical trends, not the products of a single electoral environment. Trump's brand of racial politics (and the Democrats' nomination of a feminist woman) are likely to further this divide, at least in the short term, but there is little reason to view this election as representing an "inflection point" of foundational party change. Compared to a number of historical cases—such as the transformation of millions of northern urbanites from Coolidge Republicans in the 1920s to FDR Democrats in the 1930s, or the migration of southern whites en masse from the Democratic Party to the GOP over the course of two generations in the late 20th century—it doesn't seem as if we are witnessing a significant realignment of party supporters in the electorate.

The article also touches on the subject of geography, demonstrating that the parts of the U.S. with the highest proportions of "non-hyphenated Americans" (mostly whites of English or Scotch-Irish descent) have shifted the farthest towards the Republican Party in recent elections. Yet this, too, can be viewed as the final stage of the southern realignment that began in the 1950s. In any case, the change described is minor in scale; the two parties' current geographic coalitions are, by historical standards, unique in their relative stability. As this figure from a forthcoming book of mine demonstrates, more than 80 percent of the states voted for the same party in each of the four presidential elections between 2000 and 2012, which is the highest level of consistency in the post-Civil War era: 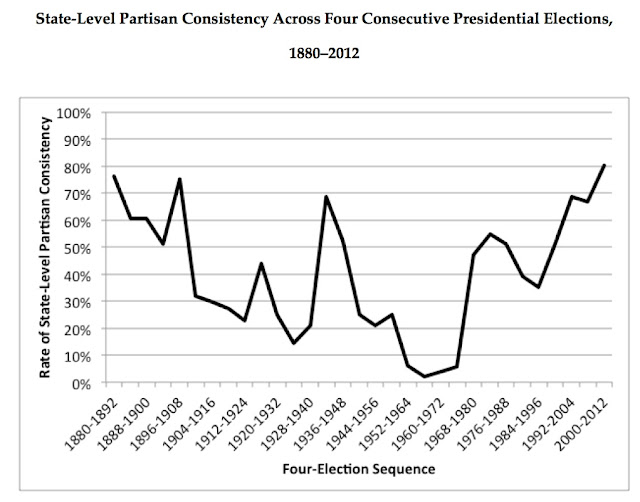 Will Trump fundamentally reorder the current electoral map? So far, it doesn't look likely; the current FiveThirtyEight forecast for 2016 is identical to the final results in 2012, identifying Hillary Clinton as the favorite in all 26 states carried by Obama and projecting a Trump lead in all 24 states won by Romney.

2. The GOP's electoral standing. The steady increase in the proportion of nonwhite voters in the American electorate is often portrayed as causing an electoral crisis for the Republican Party unless and until it figures out a way to broaden its appeal to racial minorities, especially Latinos. Since 2004 and especially 2008, younger voters are also disproportionately Democratic-leaning (the two trends are somewhat related, as the young are more racially diverse than their elders). Malone writes of the Republican Party's "demographic and cultural divergence from the majority of the country," and ex-Jeb Bush advisor Tim Miller is quoted as worrying that the GOP might well "move to a period of minority status."

I've said this before, but I continue to be somewhat baffled by characterizations of the two parties' contemporary electoral fortunes that completely exclude congressional and state-level elections, where Republicans are not only holding their own but are in fact doing very well. And if we accept the very reasonable proposition that Hillary Clinton would be neck-and-neck or even running behind right now had the Republicans nominated Marco Rubio, Scott Walker, or John Kasich instead of Trump, then even the party's current deficit in presidential polling looks more like the product of a nominee with limited personal appeal than a party that is systematically unable to attract a national electoral majority.

3. Will Trumpism outlast Trump? If the Trump nomination indeed marks the closing of one era of Republican politics and the opening of another, we can safely assume that Trumpism will survive and even thrive in the Republican Party regardless of whether Trump himself is elected president. So far, however, Trump looks more like an individual political entrepreneur than the leader of a transformational movement within the Republican Party. He has has served as an effective vehicle for Republican primary voters to express support for a more aggressive stance against immigration, skepticism about free trade agreements, and frustration with the party's traditional leadership. But much of the institutional Republican Party remains either resistant to or glumly resigned to Trump as a candidate, in part because most leading Republicans view his brand of politics as electorally counterproductive. If he indeed loses in November, that conclusion is likely to stick.

I don't mean to dismiss some of the very real challenges now facing the Republican Party. But even if scholars like Tom Mann and Norm Ornstein are correct that the GOP is now in a state of dysfunction, evidence suggests that the party faces a bigger problem in governing effectively than in appealing to voters up and down the ballot. If the dust clears after this election to reveal a newly-elected President Hillary Clinton serving alongside a Congress in which at least one chamber is controlled by a Republican majority, it seems likely that the next four years will look, for better or worse, an awful lot like the last six—leaving 2016 to appear in retrospect like a moment of partisan evolution rather than fundamental change.
Posted by David A. Hopkins at 3:43 PM
Email ThisBlogThis!Share to TwitterShare to FacebookShare to Pinterest
Labels: Donald Trump, Election 2016, Political Geography, Republican Party
Newer Post Older Post Home