Was the Midwestern "Red Shift" More Pro-Trump or Anti-Hillary? The Answer Matters a Lot for 2018

The election analyst Nate Cohn of the New York Times published an excellent piece today arguing that the Democrats are benefiting from an electoral battleground in 2018 that is broader than was anticipated by the post-2016 conventional wisdom. In particular, he notes, Democratic candidates appear to be doing better than expected this year in heavily white, lower-education congressional districts that voted for Donald Trump. This has allowed the party to contest many more seats than it would if the scope of electoral competition were restricted to the smaller number of Republican-held well-educated suburban districts that had shifted toward Hillary Clinton in 2016.

In general, one of the most challenging aspects of analyzing events in real time is distinguishing temporary blips from more durable trends. Popular pundits and other media figures often tend to overstate the degree to which immediate events portend long-term patterns; as I noted once in another context, "There's a temptation to assume that everything new in politics is a harbinger of the future. But lots of things are dead ends: They rise, and they go away." On the other hand, we academics are often prone to the opposite bias, hanging onto familiar theories and assumptions past the point when evidence has built up that the world has indeed changed.

When it comes to the geographic polarization of American voters, there's an unmistakable decades-long trend of divergence between (pro-Democratic) metropolitan areas and (increasingly Republican) rural areas, but also an especially sharp and unprecedented increase in this gap in the 2016 presidential election—as illustrated in this summary of partisan voting in the pivotal Midwest region taken from Chapter 6 of my book Red Fighting Blue: How Geography and Electoral Rules Polarize American Politics: 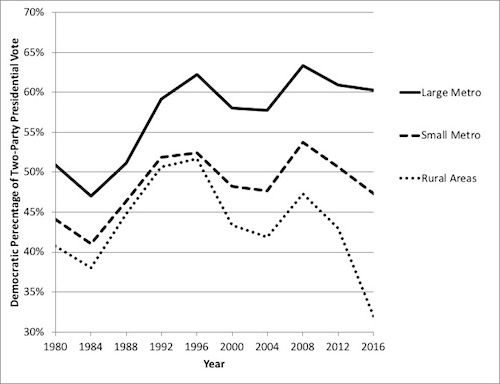 The rural Midwest has been trending Republican for a long time; Bill Clinton narrowly carried it twice in the 1990s, but Barack Obama lost this vote 53 percent to 47 percent in 2008 and 57 to 43 in 2012. In 2016, Donald Trump routed Hillary Clinton here, attracting 68 percent of the two-party rural Midwestern vote—6 points better than Ronald Reagan in his 49-state landslide 1984 reelection.

If 2016 indeed represents the "new normal," than it would make sense for analysts to take a bearish view of Democratic chances in white, small-town congressional districts in the Midwest and elsewhere this year. But if 2016 was something of an aberration, and the Trump-Clinton vote does not fully reflect the relative fundamental strength of the two parties, then the map of electoral battlegrounds opens wider, and the fortunes of congressional Democrats improve accordingly.

Midterm elections are always primarily a referendum on the president, and Trump has dominated the political scene so thoroughly since he took office that this rule of thumb is likely to be especially applicable to 2018. If the remarkable Republican strength in the rural Midwest in 2016 was primarily a reflection of Trump's personal popularity, we might expect it to carry over into 2018 unless a significant share of formerly-enthusiastic Trump supporters had become disillusioned in the interim. But if the abrupt partisan shift between 2012 and 2016 visible in the figure above was largely a reflection of Hillary Clinton's personal unpopularity with rural Midwesterners—as well as a Clinton campaign that eschewed economic issues to an unprecedented degree for a modern Democrat—we shouldn't be surprised by a significant Democratic rebound in the region this November, since Clinton will be neither on the ballot nor in the White House.

Cohn's piece focuses exclusively on the House of Representatives, but the question of whether the 2016 "red shift" across the north-central section of the country is a temporary or enduring development becomes even more critical when we turn to the Senate—where Democrats are defending nine seats in Trump-carried states stretching from Pennsylvania to Montana plus two more in Minnesota (which Trump lost by less than two points). Using the 2016 presidential results as a starting point for expectations of 2018 outcomes paints a very optimistic picture for Republicans; Trump carried Indiana, Missouri, and Montana by about 20 points and won North Dakota and West Virginia by more than 35. Yet all of these states elected Democratic senators only six years ago, and all of them but North Dakota were actively contested at the presidential level as recently as 2004 or 2008.

Many loyal Democrats will not easily accept the belief that the results in 2016 reflected a widespread popular antipathy to Hillary Clinton. And the surprising nature of Trump's victory has encouraged the view, even among his fiercest critics, that he maintains under-appreciated political strengths. But the more validity to the conclusion that Trump was a weak candidate who won a close and fluky election only because he was facing a seriously flawed opponent, the rosier the outlook becomes for Democrats this November.
Posted by David A. Hopkins at 5:34 PM
Email ThisBlogThis!Share to TwitterShare to FacebookShare to Pinterest
Labels: Congressional Elections, Donald Trump, Election 2018, Geographic Polarization, Midwest, Political Geography, Red Fighting Blue
Newer Post Older Post Home