The Pew Research Center recently released an informative report on the composition of the American electorate, based on a survey of citizens whose electoral participation (or lack thereof) in 2016 was confirmed by matching their names to state voter turnout records. High-quality studies like those conducted by Pew provide more reliable information on the distribution of attributes within the voting public than the more commonly-cited (but less methodologically sound) national exit polls, and thus any discrepancies between them are usually best resolved in favor of the former.

For example, exit polls can overestimate the degree of educational attainment in the electorate. In 2016, the national exit poll found, improbably, that a full 50 percent of voters had earned at least a bachelor's degree, with just 18 percent reporting no more than a high school education. The new Pew study estimates that the true figures are the following: 37 percent with a BA degree or more, 34 percent with college experience short of a four-year degree, and 30 percent with a high school diploma or less—much closer to a rough three-way split among the no, some, and completed college categories than an even divide between four-year college graduates and non-grads.

The Pew figures aren't likely to be precisely correct; sampling error and other methodological limitations apply to them as well. But they surely come closer than the exit poll data to the true values within the American population. Since pre-election surveys and other forms of evidence indicate that Trump carried non-college-grad whites overwhelmingly (perhaps by as much as 40 points), the most logical way to account for the fact that Clinton outran Trump by 2.8 million popular votes nationwide is to assume that she prevailed among the college/post-grad sector of the electorate by a comfortable margin. In fact, Clinton is almost certainly the first Democratic presidential candidate in modern history to win more votes from white college graduates than the Republican opposition.

This achievement undoubtedly reflects the limits of Trump's appeal among college-educated voters more than any special devotion to Clinton. But the Democratic Party was evolving even before 2016 to become more dependent on the votes of racial minorities, young adults, and highly-educated professionals (the "Obama coalition") while relinquishing much of its previous electoral support among non-college-educated whites to the GOP. Moreover, recent opinion polls and the results of special elections indicate that the pro-Democratic shift among white college graduates evident in the 2016 contest has survived into 2017 and 2018, suggesting that the Democratic leanings of these voters will endure for at least as long as Trump is the leader of the Republican Party.

What are the implications of a newfound preference for Democrats within this formerly majority-Republican sector of the electorate? Here are a few areas of American politics that will be measurably affected by such a change:

1. Geography. Because educational attainment is not evenly distributed across geographic boundaries, the places where each party can expect to win votes will evolve along with the demographic composition of their voter coalitions. In general, we can expect the growing partisan divide between increasingly "blue" large metropolitan areas and securely "red" small towns, a trend explored in my recent book Red Fighting Blue: How Geography and Electoral Rules Polarize American Politics, to persist into the future. This will help Democratic candidates in high-education suburbs where a number of vulnerable Republican-held House seats are located, such as those actively contested this year in greater New York, Philadelphia, Washington, Chicago, Denver, Seattle, and Los Angeles. But most of these places already vote Democratic at the state level, while the erosion of Democratic support among non-college whites endangers the party's Senate prospects in states like Indiana, Missouri, and North Dakota. As a result, it's quite possible that the midterm elections this year will result in a majority-making Democratic "wave" of 25 seats or more in the House while simultaneously preserving, or even strengthening, Republican control of the Senate.

2. Participation. Level of educational attainment is always a powerful predictor, and often the most powerful predictor, of citizens' propensity for political engagement. Participatory activities that go beyond merely voting for president every four years—from turning out in midterm and primary elections to volunteering for campaigns, making monetary contributions, and organizing political events and groups—are all disproportionately the domain of the highly-educated. Democrats already appear to be benefiting this year from the energetic mobilization of metropolitan professionals, which has led to both a rise of political networking at the local level and a cascade of individual financial donations to Democratic candidates. In contrast, one of the biggest unanswered questions as we look forward to the 2018 midterms is whether the Republican Party will succeed in motivating the non-college-grad whites who supported Trump in heavy numbers two years ago to turn out at sufficient rates in a non-presidential election when Trump himself is not on the ballot.

3. Candidate Recruitment. Whites with college degrees are a minority of the total electorate, but they always constitute a large majority of the pool of candidates for federal and state office. A partisan shift among this population therefore influences the relative supply of strong candidates within each party's activist base. The particular antipathy to Trump evident among college-educated women in the Pew data helps to account for an unprecedented spike in the number of female candidates on the Democratic side in 2018, and the desire to send a message of opposition to Trump's behavior seems to have inspired Democratic primary voters to frequently choose these women to be standard-bearers for the party. Through the first 41 states to hold primaries so far this year, 41 percent of all Democratic House nominees this year are women, including 48 percent of all non-incumbent nominees—an astonishing increase over all previous congressional elections: 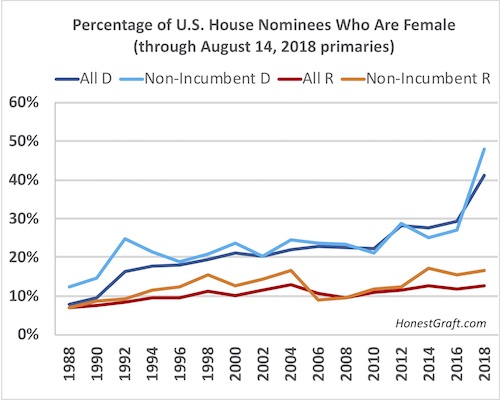 4. The Polarization of Education Policy. Education has not always been a strictly partisan or ideologically-charged issue. Past Republican presidents like George W. Bush adopted ambitious education initiatives in order to bolster their appeal among suburban moderates, while state governors and legislators of both parties have often viewed the authorization of ample K-12 and public university funding as both economically and politically advantageous. But there are signs that this bipartisan consensus is coming apart. In recent years, Republican governors in Kansas and Oklahoma have enacted ambitious tax reductions that required deep offsetting decreases to local education aid, while GOP legislators in Wisconsin have targeted state universities for budget cuts and other restrictions. In addition, conservative media sources now repeatedly direct sharp criticism at the American educational system, often describing universities as bastions of intolerant leftism and mocking college students as hopelessly coddled "snowflakes."

If highly-educated voters continue to drift toward the Democrats, a key constituency that might be expected to serve as an internal base of resistance against these policies will lose its current degree of influence within the Republican Party—which may well only further reinforce the trend of growing polarization. Trump has not made education a presidential priority, and his appointment of the controversial Betsy DeVos as secretary of education has done little to bolster his popular standing on the issue. But while Republicans may pay an electoral price in the short term due to the countermobilization of concerned parents and outraged teachers, the prospect of a perpetual partisan war over the value of American education ultimately threatens the interests of educators much more than those of politicians.
Posted by David A. Hopkins at 5:39 PM
Email ThisBlogThis!Share to TwitterShare to FacebookShare to Pinterest
Labels: Donald Trump, Education, Election 2016, Election 2018, Exit Polls, Hillary Clinton, Pew Research Center, Pink Wave, Political Geography, Red Fighting Blue, Resistance, Women in Politics
Newer Post Older Post Home