The gender gap, produced by the relative pro-Democratic lean of women and pro-Republican lean of men in party affiliation and voting habits, has been a fact of American electoral life since the 1980s. In 2016, according to a study by the Pew Research Center, women voted Democratic for president by a margin of 15 points (54 percent to 39 percent), while men voted Republican by 11 points (52 percent to 41 percent). This difference was somewhat larger in 2016 than in other recent elections—probably reflecting the specific candidates on the ballot last time—though not dramatically so; Gallup estimated in 2012 that Barack Obama had carried the women's vote by 12 points while losing to Mitt Romney by 8 points among men.

But gender differences in the composition of the parties become greater as we move up the ladder of political engagement from average voters to activists, candidates, interest group leaders, and elected officials. Today, for example, 74 percent of female senators are Democrats, as are 73 percent of female U.S. House members—even though Republicans outnumber Democrats overall in both chambers. And this elite-level gender gap is certain to grow after the 2018 midterms. Democrats have nominated 183 women for the House this year (compared to 52 for the Republicans), representing a record 43 percent of the party's candidates. Among non-incumbents, a full 50 percent of Democratic House candidates are female, compared to 18 percent for the GOP: 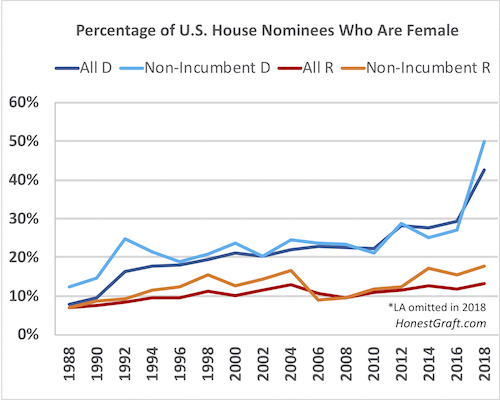 This imbalance between the parties is also evident in senatorial and gubernatorial races, where women constitute 38 percent of Democratic nominees in 2018, compared to 17 percent of Republican nominees: 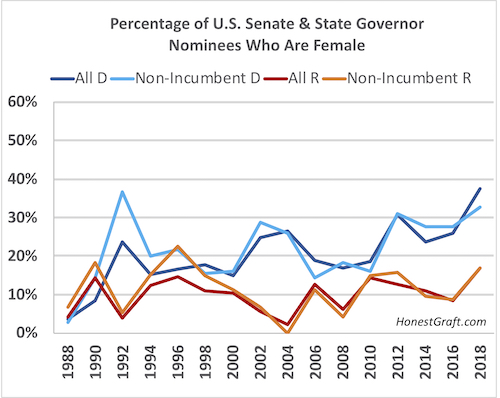 Democratic women are still undercounted in leadership ranks; because they reliably outnumber men among the party's supporters in the national electorate, even the perfectly balanced gender ratio among non-incumbent House candidates in 2018 gives female Democrats less than their proportionate share. But Republican women are underrepresented among the politician class to a much greater degree. According to the Pew data, women provided Donald Trump with about 48 percent of his popular votes in 2016, yet they constitute only 14 percent of the party's 2018 congressional candidates, 12 percent of its sitting senators and governors, and 10 percent of its current House membership. And it's quite possible that the share of female Republicans in Congress will decline further after 2018, since several veteran incumbents are retiring and a few others face tough races against Democratic challengers this November.

So there are really two gender gaps—one each in mass and elite politics—that differ markedly in magnitude. But they differ in their character as well. Scholars have not settled on a consensus explanation for the emergence of the gender gap among rank-and-file voters, but some analyses have suggested that, despite common assumptions that political disagreements between male and female citizens center mostly on stereotypical "women's issues," its existence mostly reflects distinct views on economics. In general, women tend to be more liberal than men on kitchen-table domestic policy concerns like health care and Social Security, perhaps reflecting the fact that they are collectively more economically vulnerable than men—especially if unmarried.

In the echelons of political leadership, however, the partisan loyalties and policy priorities of many women on the Democratic left are visibly fueled by a personal commitment to feminism and related social causes. Because the top ranks of the conservative Republican opposition are so heavily dominated by men, the landscape populated by nationally prominent politicians and activists—as well as the related professional worlds inhabited by reporters, intellectuals, social critics, media personalities, and the rest of the "creative class"—can resemble a perpetually polarized battle of the sexes in which gender differences closely map onto other stark political divisions separating participants along lines of partisanship, ideology, and cultural perspective.

This pattern is further reinforced by current fashions in liberal thought and rhetoric. The strong individualistic streak that once characterized the American left is gradually giving way to newer intellectual trends emphasizing the inescapable salience of social group membership as a source of common interests, priorities, experiences, and threats. Contemporary liberal activists with visible social media platforms or prominent positions in opinion journalism and the entertainment industry commonly characterize issues like abortion, sexual assault and harassment, and demands for demographic diversity in high-status professions as uniting women as a group ("#YesAllWomen") against a male-identified opposition bent on their subjugation ("#SmashThePatriarchy").

This doesn't mean that the promotion of feminist thought by liberal elites has had little effect on public opinion more broadly. The reception of these ideas has merely been much warmer among Democrats than among Republicans—even female Republicans—further fueling a societal debate in which the largest divide is between the two parties, not the two genders. Analysis that fails to acknowledge the overwhelming influence of partisanship risks misstating or incorrectly forecasting the public's response to political events or figures that touch on gender issues. Feminist thinkers and activists may claim the standing to speak on behalf of women as a group, but women out in the public at large exhibit much less collective coherence, or distinctiveness from men, than it appears from the vantage point of the politically hyper-engaged.

For example, when the "Access Hollywood" footage of Donald Trump surfaced in October 2016, most pundits, and even leading Republicans like Reince Priebus and Paul Ryan, assumed that scandalized women would abandon his candidacy en masse, leaving him to a certain and perhaps historic defeat. Instead, Trump's female supporters stayed loyal and carried him to an upset victory. Likewise, the emergence this week of sexual assault allegations against Supreme Court nominee Brett Kavanaugh inspired predictions from some corners of a popular backlash among women that would soon scuttle his chances of confirmation in the Senate. It's too soon to know for sure, but there's little evidence so far of significant erosion in Kavanaugh's public support; Democrats already disliked him, and Republicans who were initially favorable to his nomination haven't yet heard anything to change their minds.

I've argued repeatedly that the coast-to-coast eruption of female-led Democratic activism in 2018 is the most important electoral development of the year, and probably the most underappreciated. A compositional transformation and mass mobilization on such a large scale is sure to have significant consequences for American political life even if it is confined to only one party. And this "pink wave" is itself a response to key developments in Republican politics that culminated in the election of the current presidential administration.

We don't yet know, however, whether Democratic primary voters' growing preference for female candidates will be shared by the much larger and politically diverse general electorate this November, or how the feminist case against Republican rule made by thought leaders in the national media will resonate among women—or men, for that matter—in the pivotal midwestern constituencies that hold the balance of power in Congress. In the age of Trump, the gender gap among elites seems to be growing more intense by the day. But will the mass gender gap start moving in the same direction, or will the gap between the gaps just continue to grow?
Posted by David A. Hopkins at 5:23 PM
Email ThisBlogThis!Share to TwitterShare to FacebookShare to Pinterest
Labels: Brett Kavanaugh, Congressional Elections, Donald Trump, Election 2018, Feminism, Gender, Gender Gap, Liberalism, Public Opinion, Resistance
Newer Post Older Post Home