2020 Has Quietly Become Another "Year of the Woman"

The entire House of Representatives and one-third of the Senate are up for election every two years. But congressional elections tend to lead the news only every other cycle, when there isn't a concurrent presidential contest. James Madison may have believed that the "legislative authority necessarily predominates" over the executive, but most Americans don't seem to behave accordingly; a development or trend in congressional politics that would be treated like a big deal in a midterm year will always receive much less attention if it happens to coincide with the selection of the president.

In 2018, the leading story of the congressional midterms was the anti-Trump backlash that handed control of the House of Representatives to the opposition Democrats. The "resistance movement" widely credited with fueling the Democratic victory was distinctively female in its complexion—not only among voters and activists but also at the level of the candidates themselves. A record number of women sought public office in 2018, and a record number were elected to Congress.

Though it hasn't received the same degree of notice this time around, the records broken in 2018 will be broken again this year. With yesterday's Delaware primary election marking the end of the congressional nomination season, the numbers are now available to make full historical comparisons. Among Democrats, 48 percent of all House nominees in 2020 are women, exceeding the all-time high of 42 percent set in 2018. And for the first time in history, a majority (58 percent) of non-incumbent Democratic nominees are women.

An even bigger change has happened on the Republican side this year. The mobilization of women was a single-party phenomenon last election, but now it's become bipartisan. The share of female Republican House nominees grew from 13 percent to 23 percent between 2018 and 2020, and the share of women among non-incumbent nominees surged from 18 percent to 33 percent—not only easily outpacing any previous election for Republicans, but even exceeding the Democratic rate in every year before 2018. 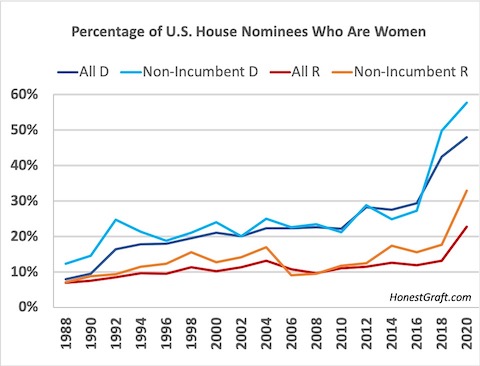 The picture in Senate and governors' races is less dramatic, but still shows an upward trend over time in both parties. The total number of female Democratic nominees declined a bit between 2018 and 2020, but that reflected a more heavily male class of sitting senators seeking re-election this year; the share of women continued to rise slightly among non-incumbent Democrats. In the Republican Party, 2020 did not produce the same abrupt spike in Senate and governors' contests that it did in House elections, but the party still narrowly set an all-time record with women constituting 19 percent of all nominees (up from 17 percent in 2018). 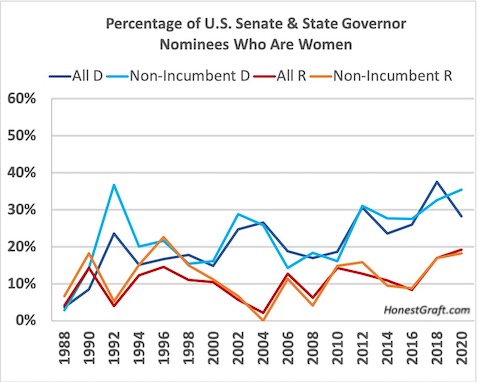 Most female congressional candidates won't win in November, since most non-incumbent nominees suffer defeat regardless of gender. Even so, it's likely that there will be a modestly higher number of women in the 2021–2022 Congress than there are today, especially since Republican women are sure to increase their representation in the House from the mere 13 now serving. With the possibility of a first-ever female vice president winning office as well, 2020 could quietly turn out to be the biggest electoral "year of the woman" yet.
Posted by David A. Hopkins at 2:53 PM
Email ThisBlogThis!Share to TwitterShare to FacebookShare to Pinterest
Labels: Congress, Congressional Elections, Election 2020, Resistance, Women in Politics
Newer Post Older Post Home