One of the major political events of 2018 was a sudden, historically unparalleled surge of women running for office—a development that reflected the energetic political mobilization of women within the Democratic Party after the election of Donald Trump over Hillary Clinton two years before. The Congress that took office in January 2019 contained a record 102 female members of the House of Representatives  and 25 female senators. (Since then, the number of women has decreased by 1 in the House and increased by 1 in the Senate.) In both chambers, the partisan distribution is heavily skewed: Democratic women currently outnumber Republican women by a margin of 88 to 13 in the House and 17 to 9 in the Senate.

The congressional elections of 2020 have received much less notice than those of two years ago; apparently there are a few other big national stories to divert Americans' attention these days. But with slightly more than half of the year's House nominations having been decided by the primary voters of the two parties as of mid-June, it's worth checking in to see whether last election's explosive rise in female nominees has carried over to the current contest. As the figure below shows, the surge has not only continued among Democrats, it has spread to the Republican Party as well: 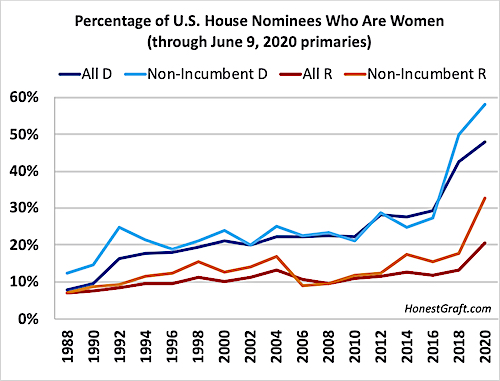 The share of female House nominees in the Democratic Party shot up from 29 percent in 2016 (itself a record at the time) to 42 percent in 2018; this year, it has increased still further to 48 percent as of this week—within reach of a numerically equal gender balance. The growth has been even sharper when incumbents, still a mostly male group, are excluded: from 27 percent in 2016 to 49.8 percent in 2018 to 58 percent (so far) in 2020. Whether or not the Democrats make history this year by nominating more total women than men for the House, they are on track to be the first party ever to nominate more non-incumbent women than non-incumbent men.

For Republicans, 2018 did not bring a sudden rise in female candidates. But 2020 very much did. So far this year, women constitute 21 percent of all Republican nominees for the House and 33 percent of all non-incumbent nominees—a dramatic increase from two years ago (when the final figures were 13 percent and 18 percent, respectively) and all previous years. The gap between the parties is still substantial, but is on track to narrow slightly from its 2018 size.

We'll need further research to know for sure, but I suspect that the dynamics driving these changes are somewhat different in each party. On the Democratic side, the Trump era has brought a sudden increase in women motivated to seek political power in response to his unexpected victory, combined with what appears to be an increasing preference among Democratic voters for female congressional nominees. In many strongly Republican districts that are not being seriously contested by the national parties, it seems that simply having a female name has often become a key ballot advantage for otherwise unknown Democratic candidates running among a field of equally unknown male primary opponents.

For Republicans, the new spike in female congressional nominees is more likely a product of initiatives by party leaders to recruit more women to run for office, in order to counteract a perceived reputation for demographic exclusivity. Republican officials have recently attempted to bring more gender diversity to the party, as reflected in the appointment over the past two years of three Republican women (Cindy Hyde-Smith of Mississippi, Martha McSally of Arizona, and Kelly Loeffler of Georgia) to fill vacant seats in the U.S. Senate.

Though women are much better represented on the candidate slates of both major parties than they have been in the past, the November election is unlikely to produce a 2021–2022 Congress with a large number of new female faces. Most challengers in congressional races are perennially destined to lose, and 2020 seems likely to be a more friendly election for incumbents than 2018 was. A few seats now held by retiring male representatives are likely to elect women this fall, including Iowa-2, Illinois-15, and Texas-24, but a few others may well replace departing women with male successors, including Alabama-2, Hawaii-2, and New York-17.

And in the Senate, it's quite possible that the number of women will actually decline in 2021. McSally and Loeffler both face serious challenges by male opponents in this fall's elections (two other electorally vulnerable incumbents, Susan Collins of Maine and Joni Ernst of Iowa, would be replaced by other women if they lose in November). At least five sitting senators—Kamala Harris of California, Amy Klobuchar of Minnesota, Elizabeth Warren of Massachusetts, Tammy Duckworth of Illinois, and Tammy Baldwin of Wisconsin—are plausible choices for the vice presidential slot on the Democratic national ticket, with no guarantee that a victorious running mate would be replaced in the Senate by another woman.

The only seat now occupied by a male senator that is more likely than not to elect a woman in 2020 is Wyoming, where Republican Cynthia Lummis is a heavy favorite to succeed the retiring Mike Enzi. Elsewhere, the female candidate with the best shot of winning a seat currently held by a man seems at this stage to be Democrat Barbara Bollier of Kansas, but she remains a clear underdog whose chances of winning a normally red state probably depend on the Republicans nominating a weak opponent in the August 4 primary. So while this year's congressional elections are shaping up to be a notable milestone in female representation within both major parties, next year's Congress will not be in position to make similar history.
Posted by David A. Hopkins at 1:38 PM
Email ThisBlogThis!Share to TwitterShare to FacebookShare to Pinterest
Labels: Democratic Party, Election 2020, Republican Party, Resistance, Women in Politics
Newer Post Older Post Home