"New" States Get the Hype, But the Electoral Map Hasn't Changed Much in 2020

To a certain type of election-watcher, there are few things more exciting than witnessing a state that was once loyally partisan transform into a fiercely contested battleground. Recent public opinion surveys suggesting that Joe Biden is running a close race against Donald Trump in Texas and Georgia—two traditional Republican bastions that have not been competitive in presidential elections since the 1990s—and now leads in Arizona, which has voted Democratic for president only once (1996) in the past 70 years, have, unsurprisingly, received widespread attention from political commentators.

But the complete picture of the emerging electoral map in 2020 reveals far more continuity than change. The current era of presidential elections is distinguished by a historically unmatched degree of consistency in state-level partisan alignments, as depicted in this chart from my book Red Fighting Blue: How Geography and Electoral Rules Polarize American Politics: 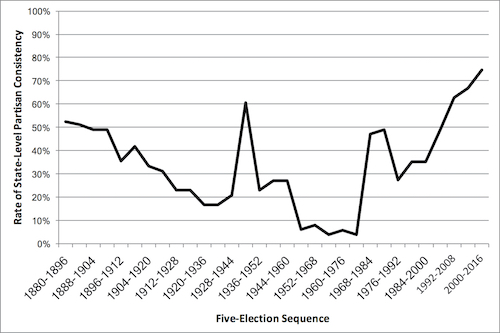 Of the 37 states (plus the District of Columbia) that voted for the same party's nominees in each of the five presidential elections between 2000 and 2016, Arizona, Georgia, and Texas seem to be the only plausible candidates to break their streak in 2020—unless the next few months turn so dramatically in Donald Trump's favor that he manages to carry Minnesota or Maine. But even the potential addition of new Sun Belt territory to the familiar Midwest-centered battleground state map doesn't mean that there has been a significant partisan realignment of the South or Southwest over the past four years. What the close recent polls in these states really indicate is not that Trump has developed an unusual regional weakness, but rather that Biden now has a national lead strong enough to pull a few Republican-leaning states into the "competitive" category.

If we compare the two-party popular vote outcome in 2016 with today's two-party polling margin as estimated by The Economist's daily forecasting model for the 16 states where both parties received at least 45 percent of the vote in the last election, we see (after accounting for sampling error and variations in data quality) what looks like a fairly uniform pro-Democratic shift nationwide:

Polling estimates are, of course, inexact, and all three of the new Sun Belt battlegrounds had already swum against the national tide by becoming "bluer" between 2012 and 2016. But the best recent evidence indicates that these states remain more Republican than the national average, and are currently competitive mostly because Biden is well ahead in the overall popular vote. Even so, Biden appears to have a consistent lead only in Arizona, and he still trails Trump in Texas.

If Biden's current advantage is changing the electoral map in some ways, it's working against change in others. After Trump won Ohio and Iowa by unusually wide margins in 2016, some analysts speculated that both states would lose battleground status in 2020, conceded to the GOP from the start of the campaign. Ohio and Iowa remain clearly Republican-leaning in 2020 compared to the nation as a whole, but Biden's overall lead allows him to keep both states in play (at least for now), and the Trump campaign is indeed spending money to defend them.

A scenario in which Biden maintains or expands his current margin would allow Democrats to consider deploying campaign resources into these states in pursuit of a decisive national victory and gains in downballot offices. But if the race starts to tighten, diverting attention to red-leaning states will be considerably less appealing, and Democratic dreams of "expanding the map" will need to wait for a future contest. Either way, the electoral college outcome in 2020 is still likely to pivot on the four states that Trump carried by narrow margins in 2016: Michigan, Pennsylvania, Wisconsin, and Florida. And there's nothing new at all about those particular states deciding who the next president will be.
Posted by David A. Hopkins at 8:55 PM
Email ThisBlogThis!Share to TwitterShare to FacebookShare to Pinterest
Labels: Arizona, Battleground States, Donald Trump, Election 2020, Georgia, Joe Biden, Political Geography, Red Fighting Blue, Texas
Newer Post Older Post Home