We're now in the home stretch of the 2020 presidential campaign, with millions of ballots already cast via early and mail-in voting. The two candidates and their advisors are now making final decisions about where to allocate resources—ad spending, voter mobilization operations, and travel by the nominees and their running mates, spouses‚ and top surrogates—based on their current appraisals of optimal electoral college strategy.

Donald Trump and Hillary Clinton actively contested 14 states between them in 2016, collectively casting 32 percent of the nation's electoral votes. In the wake of the last election, however, most analysts expected the geographic scope of electoral competition to shrink in 2020. Trump's comfortable victories in Ohio (by 8 percentage points) and Iowa (by more than 9), along with his unexpected strength across the rest of the Midwest, seemed to signal that these two perennial battleground states were no longer pivotal and might be justifiably conceded to the Republicans in the future, while the pro-Democratic shift evident in sections of the Sun Belt from 2012 to 2016 wasn't clearly strong enough yet to push traditionally "red" bastions like Georgia and Texas into legitimate partisan competitiveness.

These expectations were all perfectly reasonable extrapolations from the 2016 results. But they rested on assumptions of another tight contest in 2020, rather than the clear and consistent Democratic lead—now flirting with double digits in the national popular vote—that actually emerged. Joe Biden's overall advantage has allowed him to remain viable in Ohio and Iowa despite their recent Republican leanings while also mounting an incursion into Georgia and Texas, both uncontested by Democratic presidential candidates since the 1990s. The only two states to drop out of the battleground category between 2016 and 2020 were Virginia and Colorado, both already swiftly moving in a Democratic direction but put altogether out of reach for the Republicans by a poor national climate for the party this year.

Contrary to previous suggestions of a shrinking battleground map, then, the presidential campaigns are once again contesting 14 states in 2020 (plus the single electoral vote awarded to the winner of Nebraska's 2nd congressional district). The replacement of Virginia and Colorado with the more populous states of Texas and Georgia means that the candidates are actually fighting over more presidential electors than last time—in fact, as the figure below demonstrates, the battleground this year is the largest in terms of electoral votes since the 2000 election: 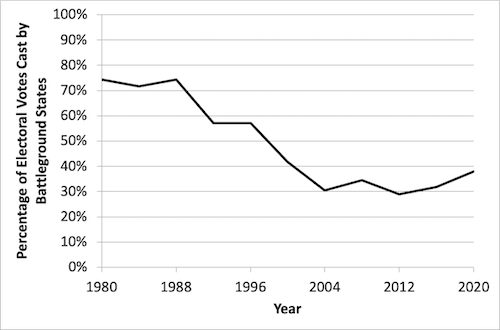 Figure adapted from Red Fighting Blue:
How Geography and Electoral Rules Polarize American Politics
It's often hard in the moment to separate short-term variation from long-term trends, to distinguish changes that are harbingers of the future from those that are merely temporary deviations from the norm. The assumption that 2016 foreshadowed a more permanent fading of Democratic fortunes in the Great Lakes states as the party built a new regional base in the metropolitan South and Southwest was reasonable enough, but may well turn out to be at least a bit premature. Predictions that the 2020 Democratic presidential nominee would perform better in Arizona (carried once by the party in the last 17 presidential elections) than Wisconsin (carried seven times in the past eight elections) aren't consistent with the polls so far; as of today, the FiveThirtyEight polling average shows Biden leading Trump by 8 points in Wisconsin and 4 points in Arizona.
Polls so far indicate a fairly uniform swing between 2016 and 2020. Biden seems to be improving on Clinton's performance by a roughly comparable margin pretty much everywhere, though it wouldn't be surprising if this shift turned out to be a bit bigger in the Midwest than the Sun Belt given that he is apparently doing a better job winning back senior citizens and non-college whites from Trump than he is in outperforming Clinton's showing among young voters and racial minorities.
At the same time, it's a legitimately important development that Arizona, Texas, and Georgia are all potentially competitive states in federal elections, even if (at least for now) it requires a 10-point national popular vote margin (and a record-breaking fundraising haul) for Democrats to put all three in contention. The changing partisan alignments of a few individual states should be understood in the proper context of what is overall a historically stable electoral map. But in an era of closely-matched and highly polarized national parties, even small shifts in geographic coalitions can have big consequences for the outcome of elections and the governance of the nation.
Posted by David A. Hopkins at 11:13 PM
Email ThisBlogThis!Share to TwitterShare to FacebookShare to Pinterest
Labels: Battleground States, Donald Trump, Election 2020, Geographic Polarization, Joe Biden, Political Geography
Newer Post Older Post Home