My new book Red Fighting Blue: How Geography and Electoral Rules Polarize American Politics demonstrates that American elections have become more geographically polarized over the past 25 years and investigates the causes and consequences of this important development. I argue that it's very difficult to understand how politics operates today without recognizing the ways in which the spatial distribution of party votes across geographic lines interacts with the rules and mechanisms of our electoral institutions to produce representative democracy in the United States.

One of the most distinctive attributes of our current political era is that the two parties are closely balanced at the national level, yet each side maintains a formidable record of electoral dominance across large regional subsections of the United States. Since the 1990s, we have experienced a series of elections in which the overall outcome has been decided by a narrow margin even as most states and congressional districts are securely and reliably either Republican or Democratic. While it was once common for most states—and nearly all large states—to be electorally up for grabs and thus actively contested by both sides in a national campaign, the number of "battleground" states has dwindled in the 21st century to a small minority of the nation: 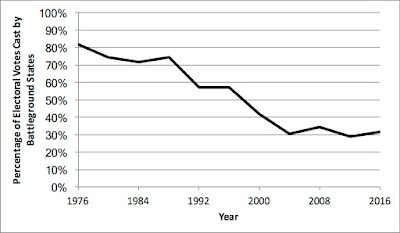 At the same time, the election-to-election stability of these state alignments has reached historically unmatched levels. It's not just the case that most states in any given year will be safely pro-Democratic or pro-Republican while a shrinking remainder of states will be open to contestation—instead, it's increasingly the same states that are predictably "red" or "blue" in election after election,  and the same few swing states, like Ohio, Florida, and Michigan, that hold the national balance of power from one election to the next. Over the past five presidential elections, 37 states and the District of Columbia have aligned with the same party in each contest; as the graph below shows, this represents a record degree of state-level consistency. We're a long way from the presidential elections of 1956 and 1964, when all but five states in the nation voted for opposite parties in two races held just eight years apart. 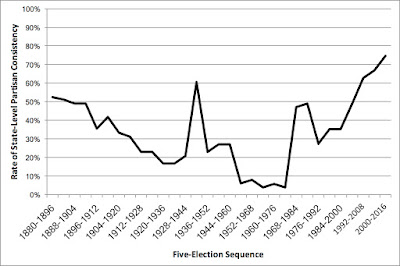 Because of the winner-take-all American electoral system, these trends mean that partisan shifts among a relatively small subset of voters in a relatively small section of the nation can have a tremendous effect on outcomes if they happen to be concentrated in exactly the right place. My political science colleague Seth Masket wrote today in Vox about the changing partisan preferences among non-college-educated whites in the small-town Midwest that proved electorally pivotal in 2016, delivering the White House to Donald Trump despite his loss in the national popular vote (see my own graph below as well). Seth concludes, I think persuasively, that these shifts are not broad enough to add up to a party "realignment"—but they still proved to be decisive because they occurred in a few key states that were otherwise closely divided between the parties. Hillary Clinton ran particularly well among college-educated whites and racial minorities in 2016, which helped her outperform previous Democratic candidates in non-battleground states like California, Texas, and Arizona but didn't pay her any dividends in the unique arithmetic of the electoral college.

Because the leadership of the two parties is as mutually polarized and otherwise differentiated as at any time in modern history, the consequences of these electoral outcomes for the trajectory of national politics are increasingly significant even as the outcomes themselves are more and more likely to be contingent on the attributes, and eccentricities, of the electoral system itself. Historically speaking, there wasn't much of a difference between how Americans voted in 2012 and how they voted in 2016. But there's an awfully big difference between President Barack Obama and President Donald Trump.
Posted by David A. Hopkins at 3:53 PM
Email ThisBlogThis!Share to TwitterShare to FacebookShare to Pinterest
Labels: Barack Obama, Donald Trump, Geographic Polarization, Hillary Clinton, Midwest, Parties, Political Geography, Red Fighting Blue
Newer Post Older Post Home